On 6th December, Finland’s Independence Day was commemorated with a demonstration in Helsinki. A delegation of around 30 men and women from the Nordic Resistance Movement’s Swedish and Norwegian branches took part in the demonstration. The organisation’s leader, Simon Lindberg, held the final speech of the event. We now publish the speech in writing.

Comrades of the national resistance! It is with great joy that I am here in Helsinki for the third year in a row, on the Finnish “so called” Independence Day.

The reason why I use the term “so called” is obvious, but could any way maybe use some clarification. It is true that Finland broke free from over a century of Russian rule, and established its own Finnish state on the 6th of December 1917 – and that is of course something to be cheerful about – a reason as good as any, to express national pride on the streets and squares.

But at the same time as Finland has acquired this freedom, it has still been – and primarily during recent decades has developed into – a pathetic vassal state in the Globalists’ iron grip. I am not only talking about EU membership, but also about the national debt and big finance’s seizing of interest, the foreign-controlled media and the increasing amount of racial strangers who are invading our borders. I am also talking about the increased oppression from the system that is affecting the Finnish citizens. Finland is maybe free on paper, but not in practicality.

It is easy to see how Finland is also increasingly developing into an oppressive state, that dutifully carries out the directives handed down by the self proclaimed Elite – at the cost of the Finnish people’s freedom.

In 2017, the Finnish civil court in Tampere banned the Nordic Resistance Movement. In 2018, the court’s unlawful ruling was upheld by the court of appeal in Turku. Not because the Nordic Resistance Movement is classed a terrorist organisation or even criminal, but because it was going against “good customs” – or in other words – because the movement disturbed and frightened the members of the New World Order.

During last year’s 6th of December demonstration, freedom flags were violently confiscated by the Finnish police, and the proud men who carried them, now stand accused of hate crimes, and could go to prison. Not because the Swastika is somehow hateful or criminal, but because it expresses a pride in the struggle that the globalists dislike and fear.

A couple of months ago, Finnish authorities denied an organisation who defined themselves as national socialist, the right to become registered. They said, that national socialism went against “good customs”. The self-appointed elite is shaking with fear and hatred of the natural white world view!

Last weekend, Finnish police confiscated two flags featuring the ancient Finnish Tursaansydän symbol. Powerful dark forces have also fought against this march being held. And the day is certainly not over yet. It truly is with a sense of pride that I-can-confirm, that they really hate us and that THEY MOST CERTAINLY FEAR US!

With all this in mind, it is fantastic to see you all here today. Righteous men and women who stand up for the people with pride, despite the aggression from the system. It is also with great joy, that I have seen national socialists being very active on the streets during the year. I also want to thank Soldiers of Odin Suomi for their show of sacrifice for the struggle and their civil courage.

Even though, the suppression of public opinion, manifests itself slightly differently, and is punished differently in various states, we can see the same hostility to freedom in Finland, also in Sweden, Norway and in most other Western countries.

They have the nerve – to call it freedom of expression, even though we are only allowed to express what has already been approved by their censors.

They have the nerve to call it freedom to organize, even though we are only allowed to have active organisations they themselves have approved.

They have the nerve to call it democracy, even though we are not allowed to vote for representatives that have not sworn loyalty to the globalists and big business.

All of us who dared to take off our blindfolds and can therefore see clearly, understand that this is nothing other than pure, traditional Chutzpah. Freedom of expression, freedom of association and democracy are DEAD in Finland and have been for quite some time now. We have never truly been allowed to conduct oppositional politics in this false state – it has really only been an illusion, they previously felt they could let us indulge in.

But now, they are so afraid of us, that they are forced to dismantle the illusion. The liberal democracy, is nothing else, than a full-scale cultural Marxist and capitalist dictatorship – its autocratic rulers, have only disguised it as a free democracy!

The rulers of the world, wanting to hold on to their power, is nothing strange in itself – all people with power tend to want to keep the status quo. The real problem is that their subjects – the people – accepts this. The white European peoples allow themselves, to be pushed around, fooled, humiliated, spat on and raped. To become second-class citizens in their own countries – the countries we own the rights to, through the blood of our ancestors!

For example, you might think there should be as many participants in this march, as there are going to be in the torch-lit march later today – that more Finns would go out onto the streets and demand real freedom, and independence, on an historic day like this.

But the truth is really, that this is somewhat of a defeatist view, and that in reality, things actually are different. If you were to suggest, that the people gathered right here, right now, are the only ones fed up with the situation and the only ones wishing for a revolutionary change in society, you – would – be terrible wrong. Because in the shadows, the support for our movement grows like never before. People are clenching their fists in their pockets in ever increasing numbers. In the break rooms of almost all workplaces, people from around the North are cursing at the development – or rather the deconstruction – of our nations and our freedom.

This is also the explanation for the increased repression – and the more openly suppressed freedom of speech. The once in power of today, can see, what many so-called “awake” nationalists can’t even see, namely, that we nationalists are on the path to something truly great. For the first time in several decades, radical and racially aware nationalists, are heading towards a REAL breakthrough!

I am not saying that victory will come tomorrow. Absolutely not. But I am saying that the winds are slowly changing, and that after years of stubborn, unyielding and self-sacrificing struggle against all the odds, we have finally started to move in the right direction.

It is because of this that the system has escalated its repression – and believe me, when I tell you, that it is going to get a lot – worse. Bigger media lies. Harder hate crime laws with harsher punishments. More banning. We will see more infiltrators who spread chaos and division, more tracked mobile and data traffic, more false-flag attacks, and all that they can come up with to stop our progress.

Therefore, I want to tell all of you who have your hearts in the right place – that whatever happens – stick together, keep fighting and keep believing in victory. As long as you stand strong and proud, THEY WILL NEVER BE ABLE TO STOP US!

All the rapes and robberies, the corruption among the politicians, the lies in the media, and the cultural marxist poison, have poured so much fuel throughout society – that all you need is a few sparks on the right place to ignite the national revolution. The one we have all eagerly been waiting for, longed for and really want to see happen.

So keep spreading the sparks, comrades – 365 days of the year in all conceivable places. When you least expect it, one of those sparks will light the FIRESTORM NEEDED TO TAKE BACK OUR NATIONS!

Because we are, as I said, on the right path, and the rise of our people is inevitable – it is not a question of if, but when, we can become the vanguard of the awakened people and FIGHT BACK FOR REAL!

When our Nordic people have broken loose from the shackles of capitalism, and the marxist subversive spirit has been repelled. When our nation’s foes have been driven into the sea and the racial aliens have been put on the first flight home. When our kindred peoples have come together in a Nordic nation, built to stand self-sufficient and strong for a 1000 years into the future.

Then we can celebrate a real Finnish freedom and independence day with great pride. Then I will – if I am still alive – proclaim the same thing as I will do right now. And that is: 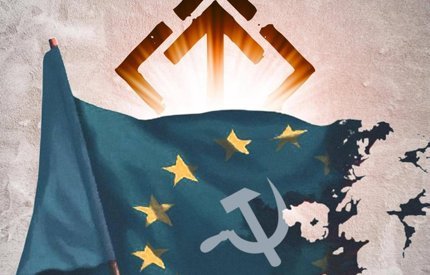